A PICTORIAL POSTCARD HISTORY OF HARWICH, DOVERCOURT AND PARKESTON.
“"We don’t remember days, we remember moments."
A Promotional card for the Great Eastern Hotel, Harwich.
return to the establishments 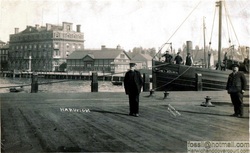 The massive former Great Eastern Hotel, built in 1864, dominates this picture of the quayside. It was built for travellers who came to the Railway Pier to catch the steamers to the continent. It later served as a Military Hospital, Council Offices, but is now an apartment block.

#157885 Harwich Pier Front (1912) Unknown Publisher
​
An early view of the Quay,  to the left is the Old Great Eastern Hotel (later the Town Hall), the "pound" itself is full of yachts, boats and in the background a G.E.R Paddle Steamer awaits its passengers, with a crowd watching on. On the Continental Pier in the distance, there are horse-drawn railway carriages loaded with coal, to refuel the steamers that plied the coastline from Norfolk, though to London. The card itself was sent on the 23rd April 1912, one week after the loss of the Titanic, the sender of the cards noting their "safe arrival" which would have been on everyone's minds at that time. 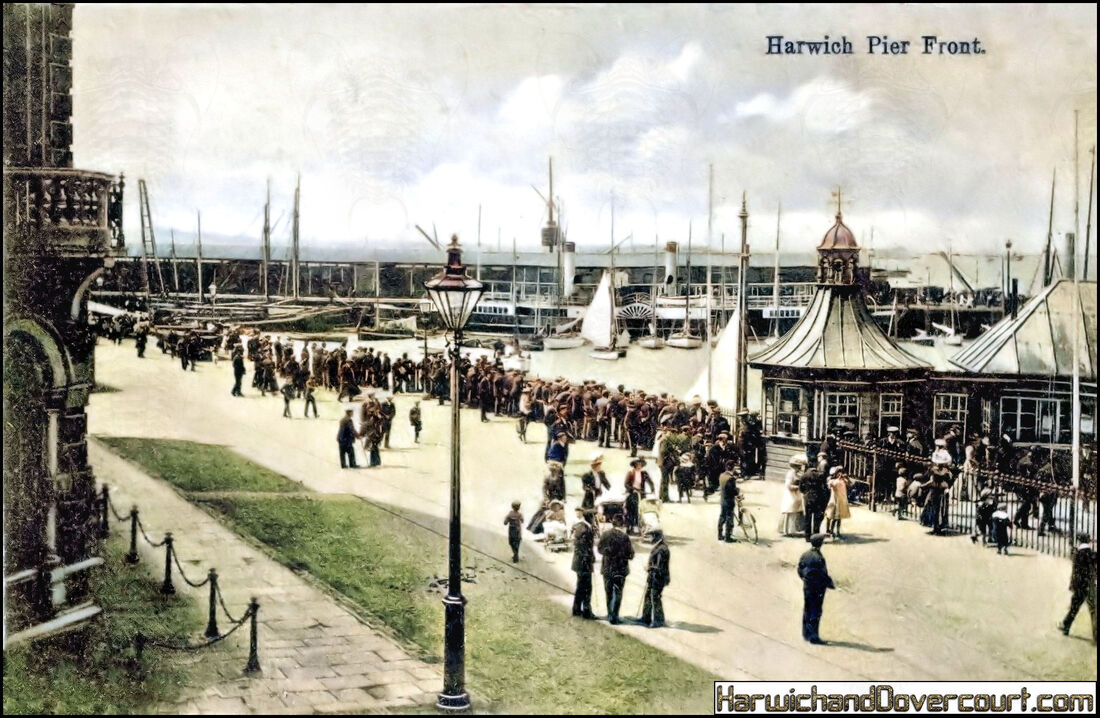 As seen from the Ha'Penny Pier

The Pier, Harwich (1930) publisher Raphael Tuck & Sons
​
Real photograph, printed in England, copyright "London", E. Glassman, Stationer & Fancy Goods Dealer, 13 Church Street, Harwich.​This was part of a six card set.Postcards from early postcard manufacturers Raphael Tuck and Sons have become a collectable category in itself. Early examples of the Tuck cards such as this have a tiny easel in the corner on the picture side.Later issues have the Tuck name or the name of one of their brands, including Oilette, Charmett, Raphotype, Rapholette, and Aquarette.

View from the sea

​
The Great Eastern Hotel, Harwich Quay (1899) by Valentine's
​
One of the earliest Harwich postcards is shown here from 1899 during the late Victorian period.
The Great Eastern Hotel was so busy at the turn of the century with passengers, that a second timber annexed building know as the "pavilion" had to be built. However prior to that, the land was occupied by an earlier timber building, which was later demolished (note the slightly later card around 1900, showing the advertising boards and "fly" posters on the demolition site). One of the earliest photographs of the Great Eastern Hotel at Harwich, taken around 1890 during the late Victorian period. The Great Eastern Hotel was so busy at the turn of the century, that a second timber annexe building know as the "Pavilion" or tea rooms, had to be built. Prior to that, the land was occupied by an earlier timber building located at Robert Hill's Coal Yard as seen below; the building was demolished around 1899. They later card from 1899, show the advertising boards and "fly" posters on the demolition site. The final card from 1900 shows the newly completed Pavilion.​ 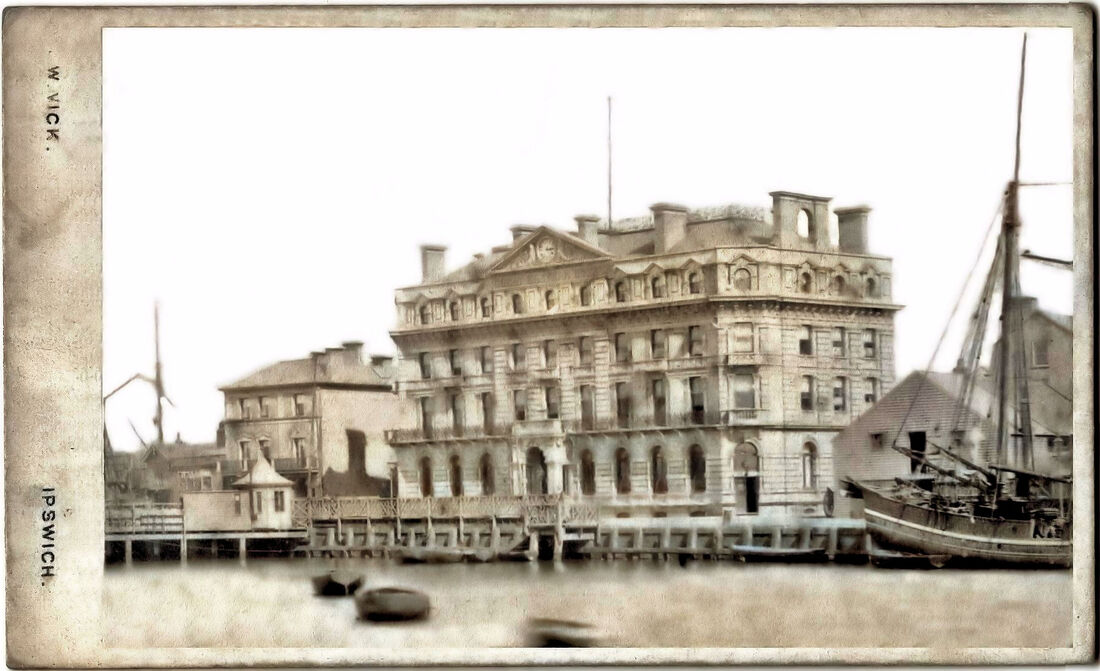 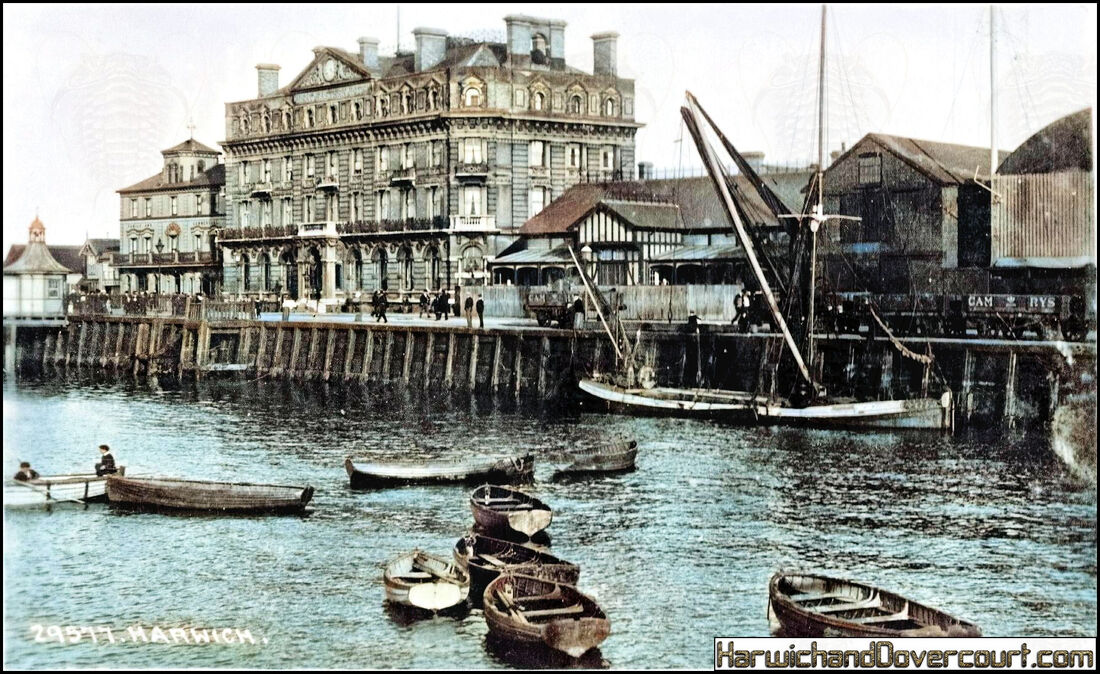 ​The "Great Eastern Hotel" and Pavilion, Harwich, Essex by Wallis (1920)

This classic "Wallis" photograph captures the true character of Harwich nearly 100 years, originally taken from the "Continental Pier. shows the Great Eastern Hotel, originally built for £32,000, alongside the Quay Pavilion built to cater for the additional Great Eastern passengers rather than the Hotel. On the pier we have a "salty old sailor", shipping and of course the obligatory official. 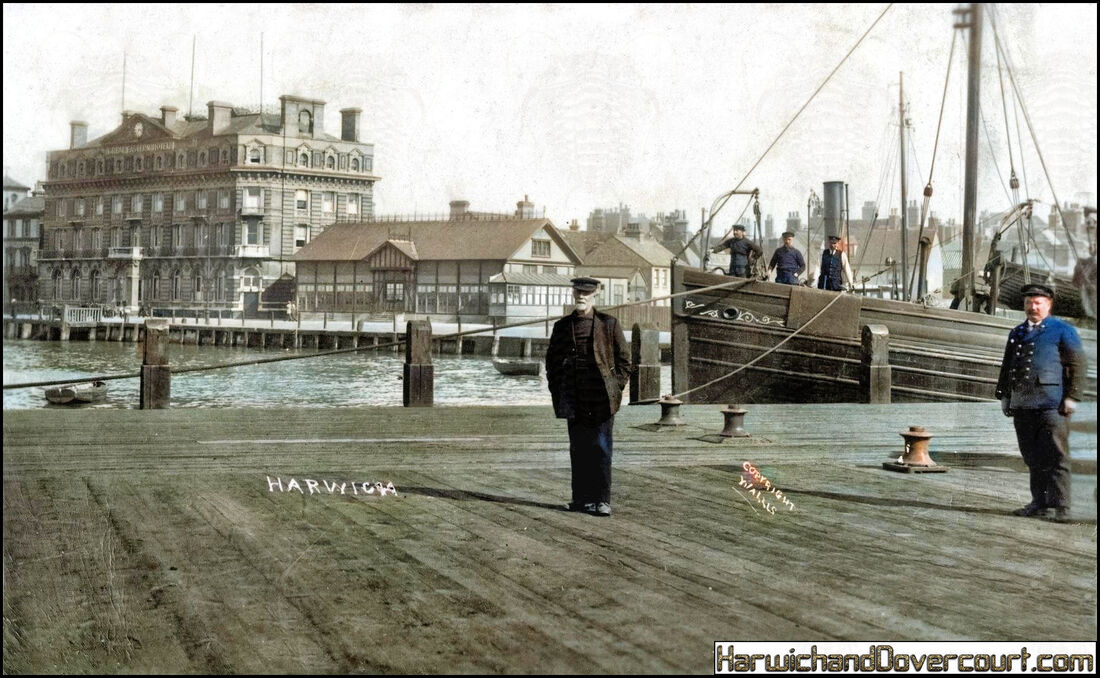