I find the still image more powerful than the moving picture, because it leaves me alone for a moment with my thoughts"

A little bit of history

In May, to commemorate the end of World War Two, I have been restoring the images of the devastation inflicted across the town, by the axis forces.
​Please click on the link below

Horse drawn "Bathing Machines" on the beach close to the Pheonix Hotel, at Dovercourt, Essex (1901)

For anyone yearning the return of some warm weather you can only dream of that moment when you finally get to the beach after a long winter, excitedly peel off your clothes, run madly towards the water and crash into the salty waves without a care in the world … this is not that. If you were a beachgoer in Georgian or Victorian times, more specifically, a female beachgoer, your day at the seaside would have likely had all the fun sucked out of it by a little invention known as the bathing machine.

At its peak of popularity, the purpose of the bathing machine was all about those crazy rules of bathing etiquette that they upheld in the 18th and 19th century, which kept women and their beach bodies out of sight (while the men frolicked freely on the beach, of course). The wooden carts with two doors on either side allowed bathers to change out of their clothes and into their bathing suits without having to be seen by the opposite sex walking across the beach in ‘improper clothing’, which in those days, on the gender-segregated beaches of Europe, would have been the modern-day equivalent of the walk of shame. The four-wheeled box would be rolled out to sea, usually by horse or sometimes human power and hauled back in when the beachgoer signalled to the driver by raising a small flag attached to the roof. Some machines were equipped with a canvas tent lowered from the seaside door, capable of being lowered to the water, giving the bather greater privacy.

Once deep enough in the surf, our bather would then exit the cart using the door facing away from prying eyes on the beach and proceed to paddle. For inexperienced swimmers (which would have been most Victorian women in their billowing swimwear), some beach resorts offered the service of a “dipper”, a strong person of the same sex who would escort the bather out to sea in the cart and essentially push them into the water and yank them out when they were done. As long you as you did not drown, for the average Victorian, this sobering experience could be considered a successful day at the beach.
Bathing machines began popping up around the 1750s when swimwear had not yet been invented and most people still swam naked. But even when early forms of swimwear did start being introduced, society conveniently decided that a ‘proper woman’ should not be seen on the beach in her bathing suit. Totally logical.
At their most popular, bathing machines lined the beaches of Britain and parts of the British Empire, as well as France, Germany, the United States and Mexico.
When legal segregation of bathing areas in Britain ended in 1901 and it finally became acceptable for both genders to bathe together, it was the beginning of the end for the bathing machine. By the 1920s, they were almost entirely extinct, only finding use catering to an elderly clientele.

An excerpt from The Traveller’s Miscellany and Magazine of Entertainment, written in 1847 recalls the details of a luxury bathing machine…
The interior is all done in snow-white enamel paint, and one-half of the floor is pierced with many holes, to allow of free drainage form wet flannels. The other half of the little room is covered with a green Japanese rug. In one corner is a big-mouthed green silk bag lined with rubber. Into this the wet bathing-togs are tossed out of the way. There are large bevel-edged mirrors let into either side of the room, and below one juts out a toilet shelf, on which is every appliance. There are pegs for towels and the bathrobe and fixed in one corner is a little square seat that when turned up reveals a locker where clean towels, soap, perfumery, etc. are stowed. Ruffles of white muslin trimmed with lace and narrow green ribbons decorate every available space.

In an era of Brazilian bikinis and topless beaches, you would not think to find any trace of the bygone bathing machines but think twice the next time you go to the seaside and use the services of changing cabin. Some of the bathing machines have indeed survived to this day as beach huts. Those adorably photogenic and colourful little beach houses? They are direct successors of the Georgian bathing machine! When they were no longer needed for being carted out to sea, many were simply stripped of their wheels and plonked permanently back on the beach– a little-known reminder of eccentric seaside history.
Perhaps worth bringing back today as playful seafaring picnic huts, as we all wait for the slow reappearance of the foreign holiday. 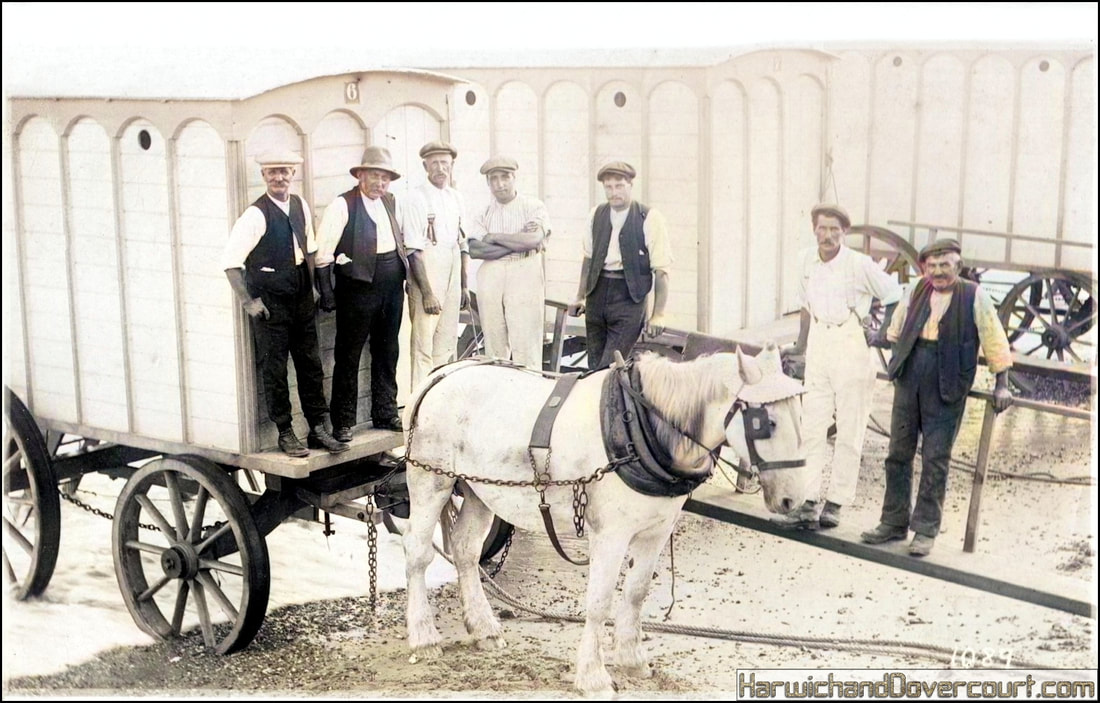 Horse drawn "Bathing Machines" on the beach close to the Pheonix Hotel, at Dovercourt, Essex (1901)

The 10th (Service) Battalion of the Bedfordshire Reserves at the Retreat, Dovercourt, Essex in November 1914

This Military card at the start of World War One, shows troops billeted at Greys Retreat opposite the Dovercourt Light houses near Beach Road. There were several retreats in Essex as far away as Epping Forest, which provided entertainment and refreshments for day trippers.

The arrival of the railway in Dovercourt, made it easier for many more people to visit the retreats.  The size of the refreshment hall shows how they could cope with hundreds of people at a time.  The retreats often were not that popular with local people owing to the noise and mess created by the huge numbers of people visiting them.

The seaside retreats opened by the Riggs family included the Dovercourt Retreat built in 1889, which was later sold in 1892 to W.F. and H.Gray, who lived and raised their families there until 1906 when W.F.Gray moved from Dovercourt and took over another retreat at Theydon Bois.  Despite the move, the Grays retained an interest in the Dovercourt business which as a limited liability company continued trading until 1959. An entry in the Herts and Essex Trades Directory for 1958-9 gives the information that as a restaurant and café at the Lower Marine Parade the firm was still operating. Shortly afterwards it went into liquidation and the site was purchased by the local Council.

Gray's 'Temperance' Retreat composed of two storeys could accommodate 2,000 people, it was a predominantly wooden construction with a tea, rooms, restaurant, and a dance floor. School and Church outings were common, with groups of children sleeping in the long dormitories. In both World Wars it was requisitioned as billets for soldiers and then fell into disrepair before being demolished in the 1950s.

This photographic postcard of a Sergeant with his section serving with the 10th Battalion, Bedfordshire Regiment, wearing Kitchener's Blues, was produced by F.G. Steggles, photographers based at Dovercourt.

The 10th (Service) Battalion was raised in November 1914 as a part of Lord Kitchener's K4 Army Group, within the 106th Brigade, 35th Division. It remained in England as a 'Reserve' battalion, being based at Dovercourt from its formation and moving to White City in January 1915. In May 1915 they moved to Colchester, then back to Dovercourt in March 1916. The battalion was redesignated as the 27th Battalion of the newly formed Training Reserve in September 1916. 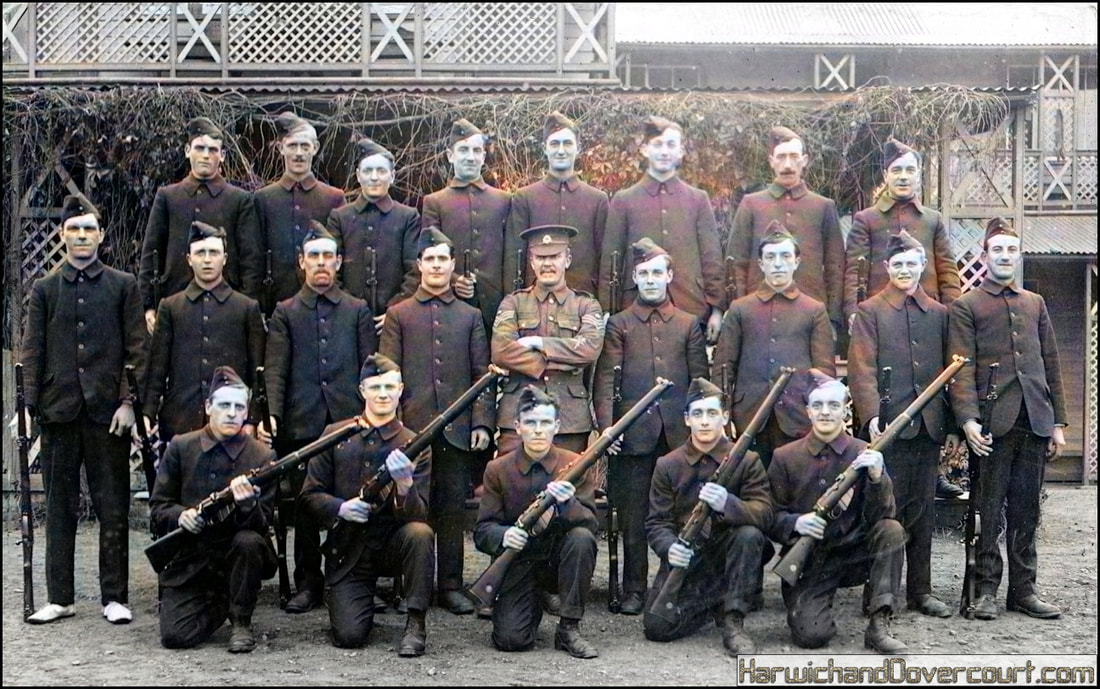 To mark "V.E" Day on the 8th/9th May, this final set of photographs captures the often forgotten cost to both the civilian population, residential and commercial properties in the Harwich Area.
​In the early hours of Saturday morning (03:55) on the 17th May 1941, the German Luftwaffe  dropped a new type of "land-mine" onto the Ordnance Building, which also caused extensive bomb damage the surrounding areas of Harwich
Commercial Buildings effected by the devastation included the Bernards Clothing Factory (bombed a week earlier on the 9th May), Garnett's General Stores and corn merchants, the Fountain Cafe, Joe Lovatt's shop and the The Salvation Army Citadel on the corner of George and West Street. Many residential properties were also damaged and in some cases still bear the scars today. 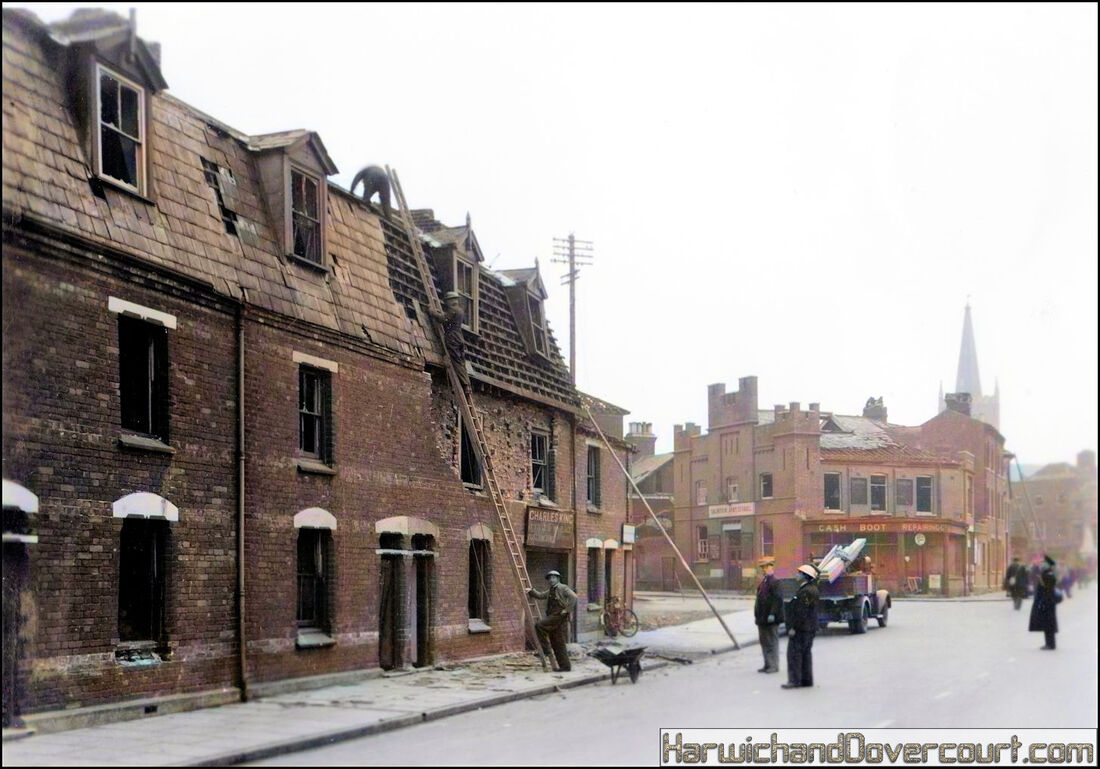 The main road premises of Charles King (removals and haulage contractor) along with several other residential properties were damaged, in the distance can be see the damage to the citadel roof and ladders up further down West St. 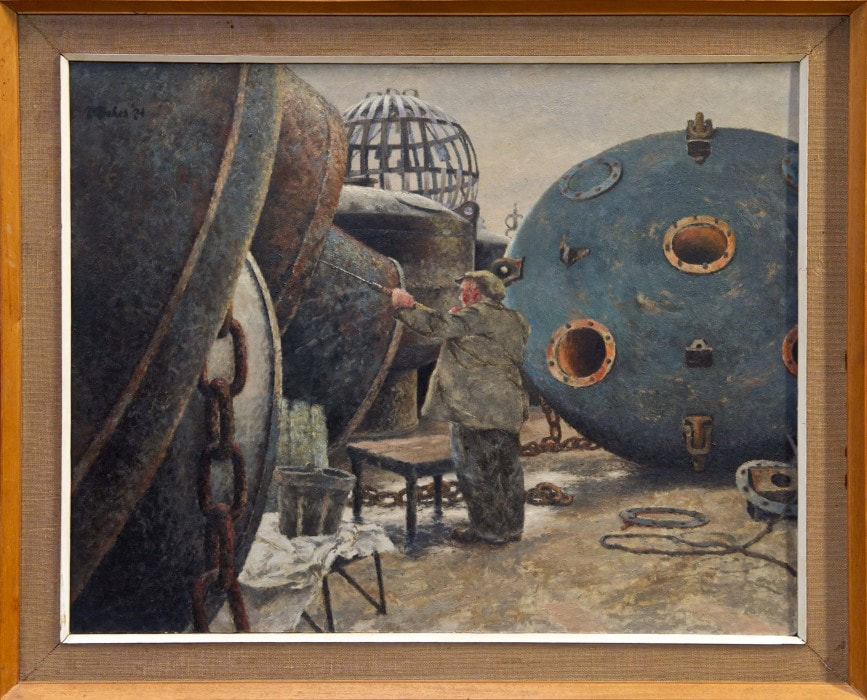 Quick Links and navigation to Sub-Sections

Final Photo of the SS Berlin Crew lost in 1907 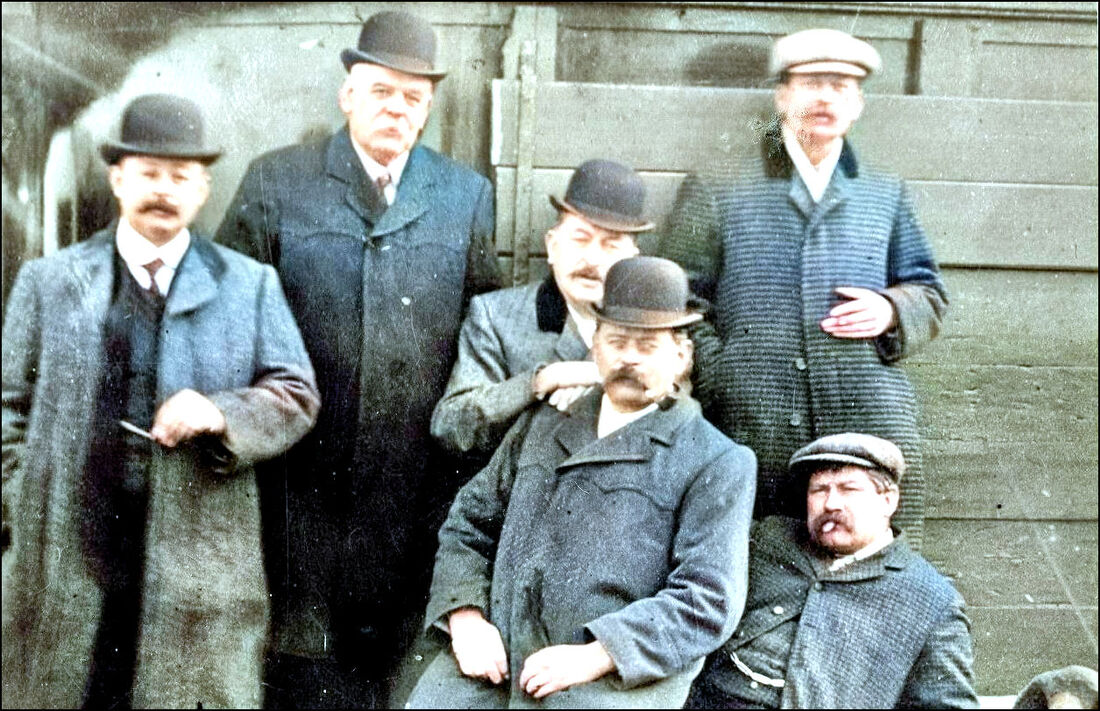 Transport
The Publishers A - Z 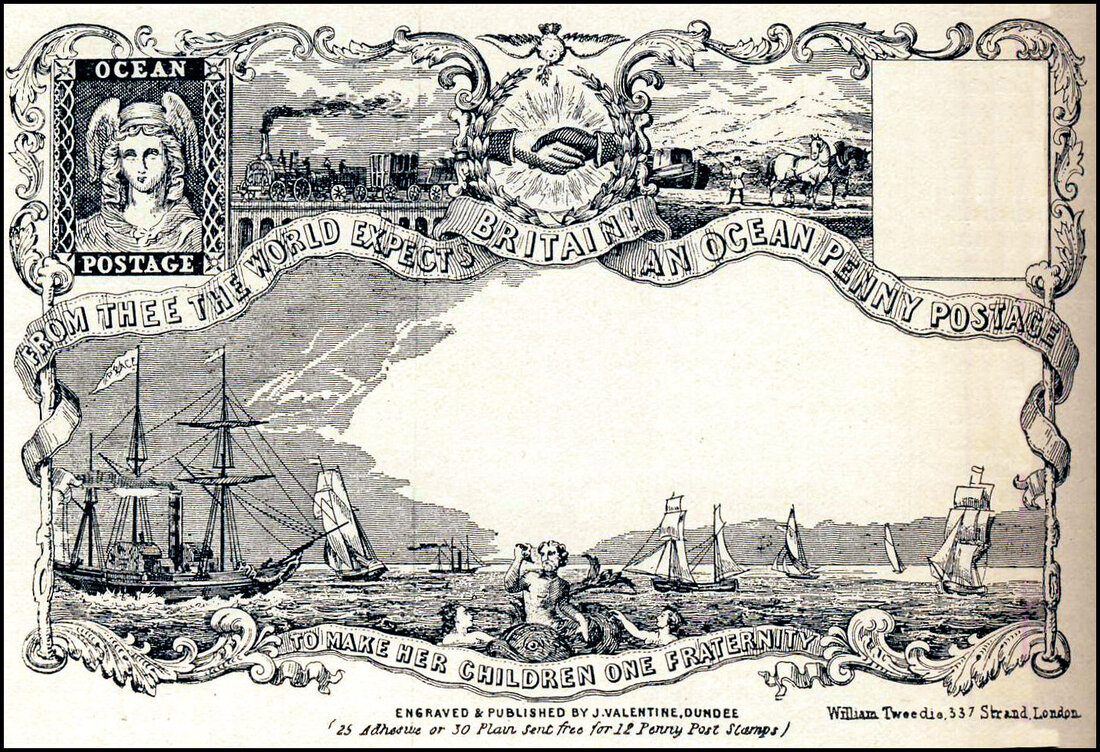