Early view of road, with the Empire Theatre on the right, taken around 1913.
Back to Dovercourt Retailers
The Upper Kingsway, Dovercourt Bay (1913) by an unknown publisher.​
​
An early Dovercourt postcard from around 1913, showing the Upper Kingsway (formally known as "Stour Road") this postcard shows an absence of all motorised vehicles. The road itself was renamed in 1905, after a visit to Dovercourt by Edward VII. On the left hand side of the road is the old Empire Cinema and closer to the top, is the empty site of the Cooperative store completed in 1928 (now the Bottle Kiln). On the right hand, the bushes mark the spot of the Bus Station and Howlett's, built at a later date. 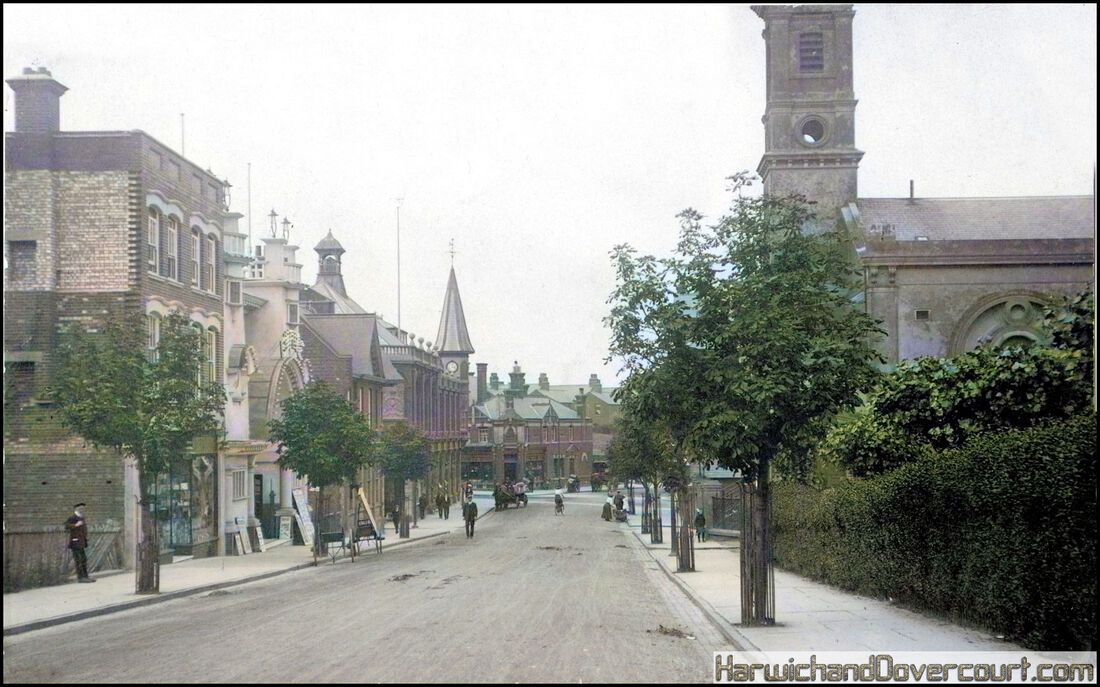 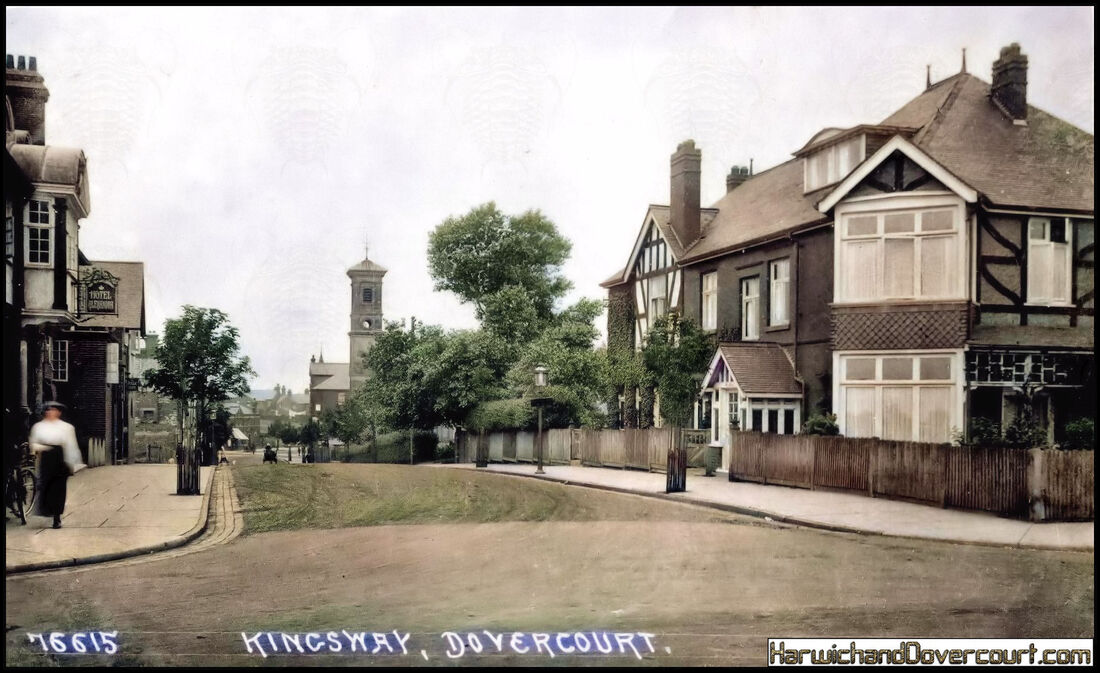 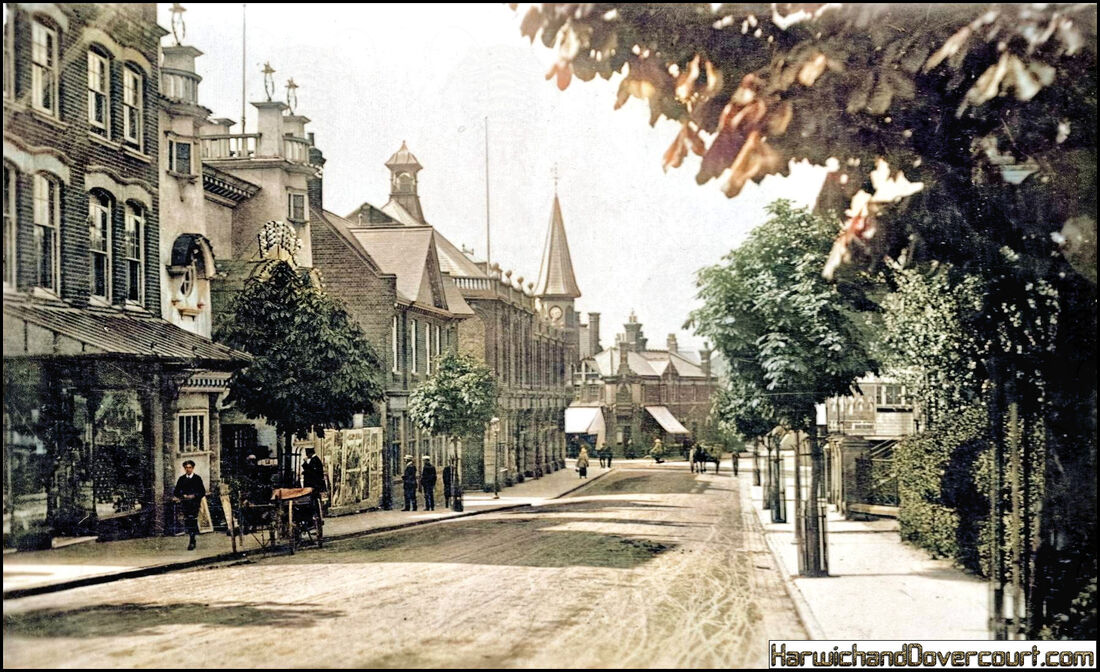 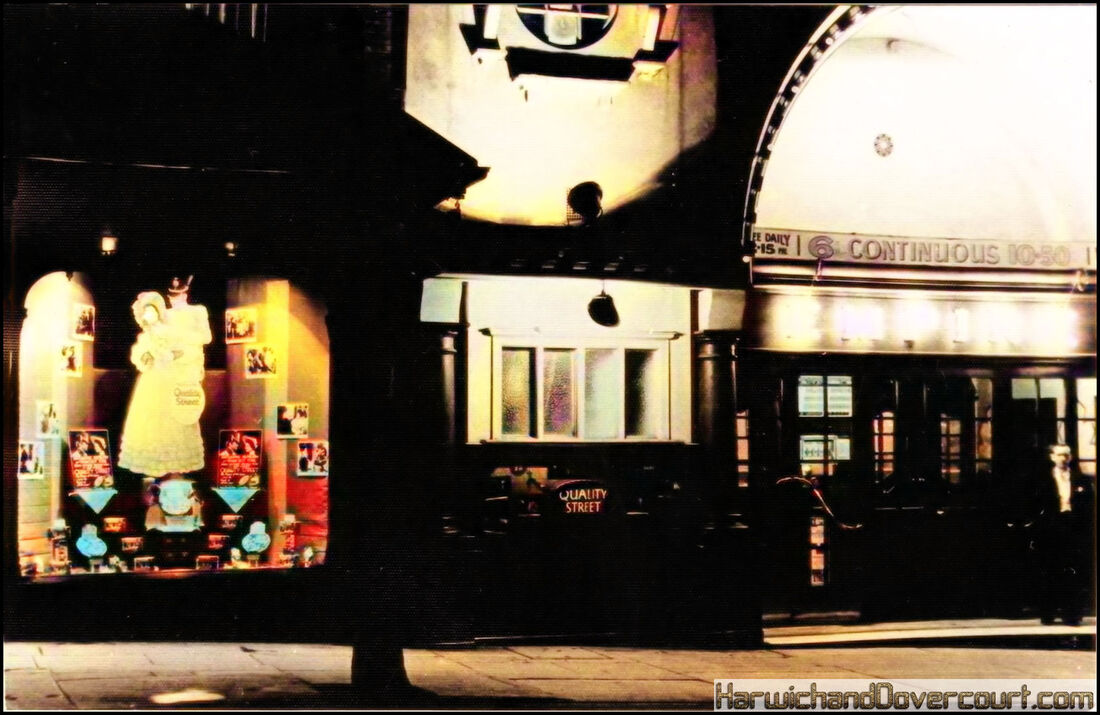 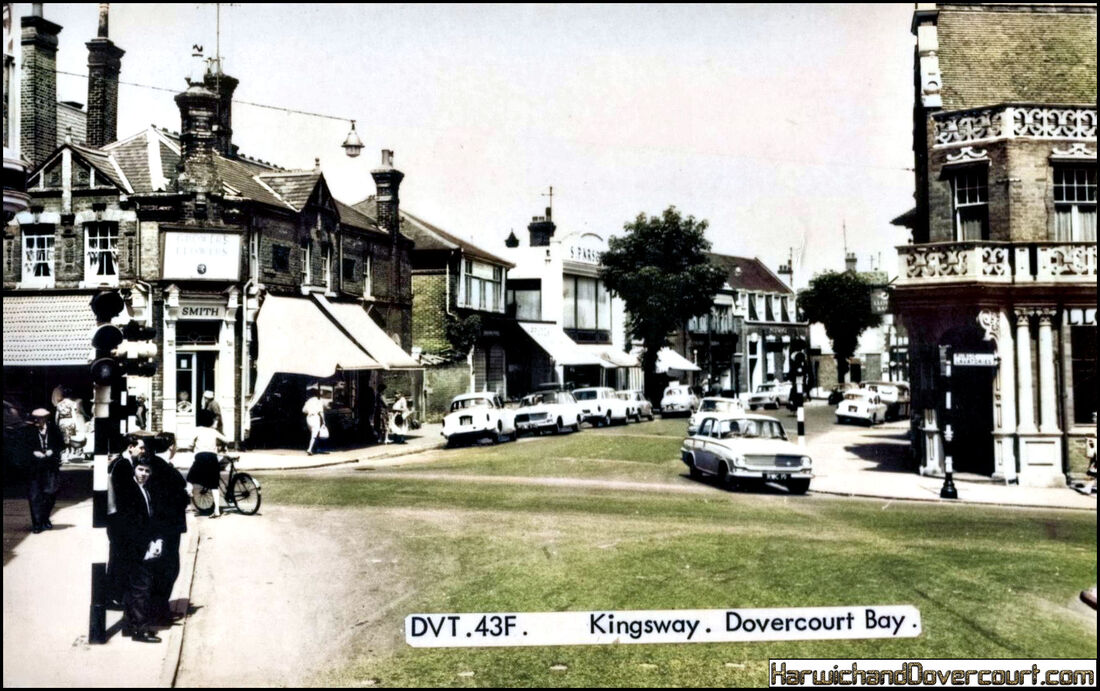 One of the very first retail stores to be built, at the western end of Dovercourt High Street in 1902 was E.C. Pattinson (Milliners), selling a great selection of hats, dresses, gloves etc. as well as carpets and even postcards. To the left of the shop, the residential property was later turned into retail outlets including Bodgener's & Co, while at the right looking up the Kingsway, we can see the Dovercourt Mission Hall, built in 1864.
This photograph taken over 111 years ago, illustrates the start of the rapid development of Dovercourt town as a major retail hub of the area, lasting almost 100 years, before the more recent onset of "out-of-town" shopping. 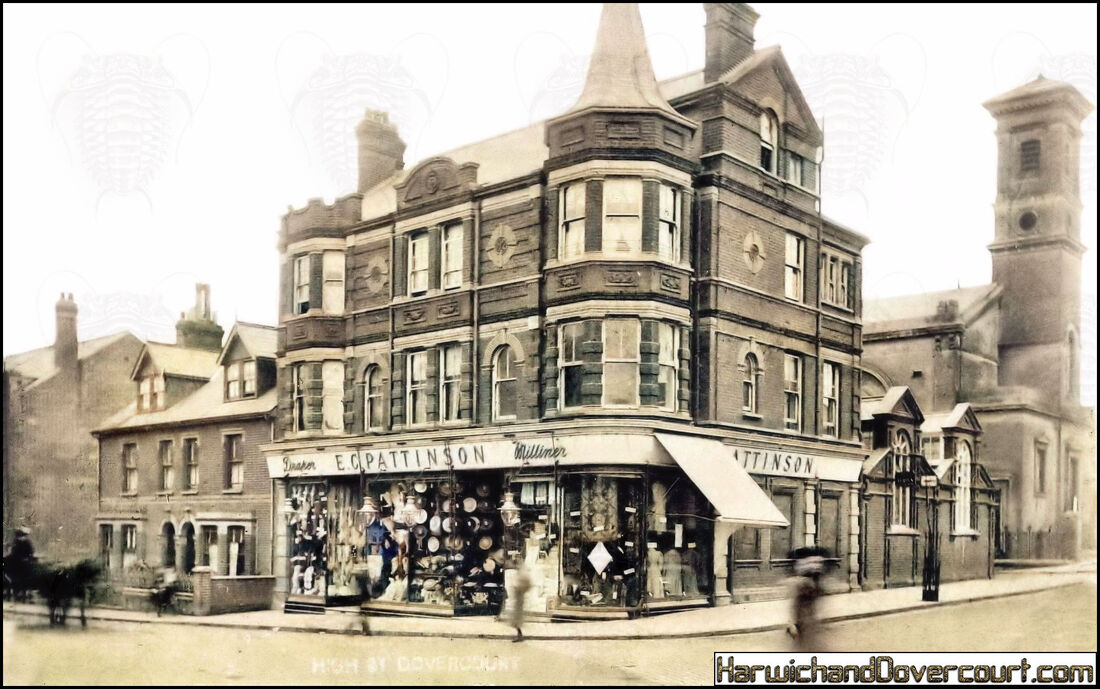 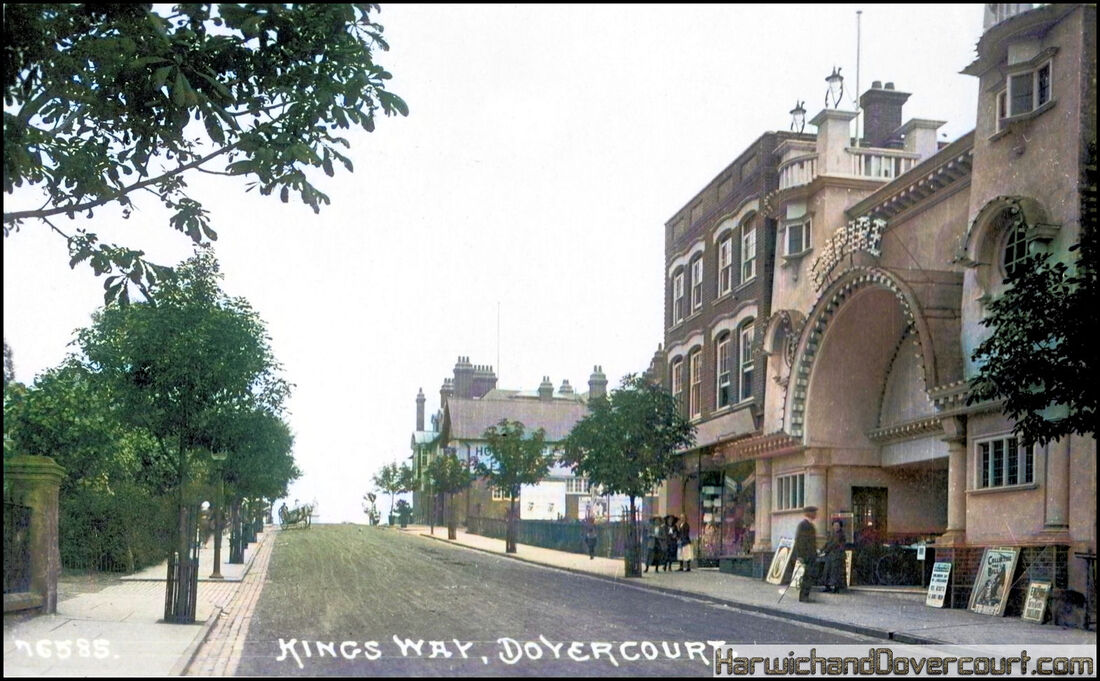 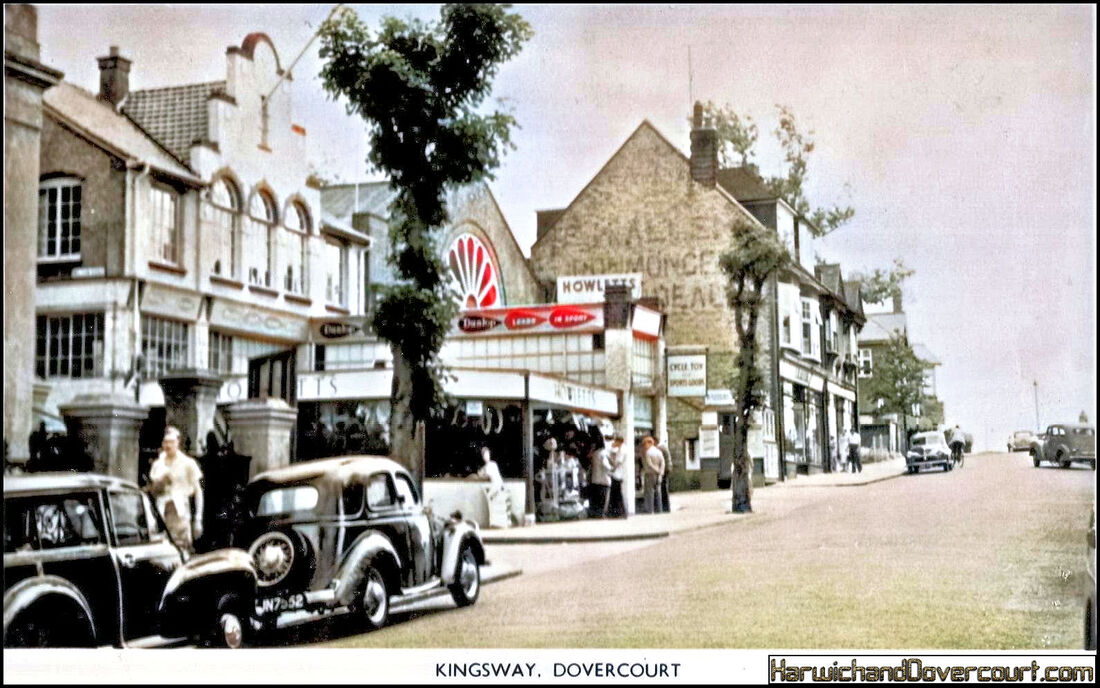 Alexandra Villa's, Kingsway, Dovercourt (1907) by F. Newell of Manningtree
​
An early Dovercourt postcard from 1907, showing Lower Kingsway (formally known as "Stour Road") this card was posted locally and shows the Villas along with Dovercourt Station in the distance. The road itself was renamed in 1905, after a visit to Dovercourt by Edward VII. Today the main residence in the forecourt is now the "White Coffee House" at 21 the Kingsway, CO12 3AB. ​The two associated postcards show the other side of the road, with the newly opened Post Office in the 1930's and Dovercourt Station, also around 1907. For Google Street view click here. 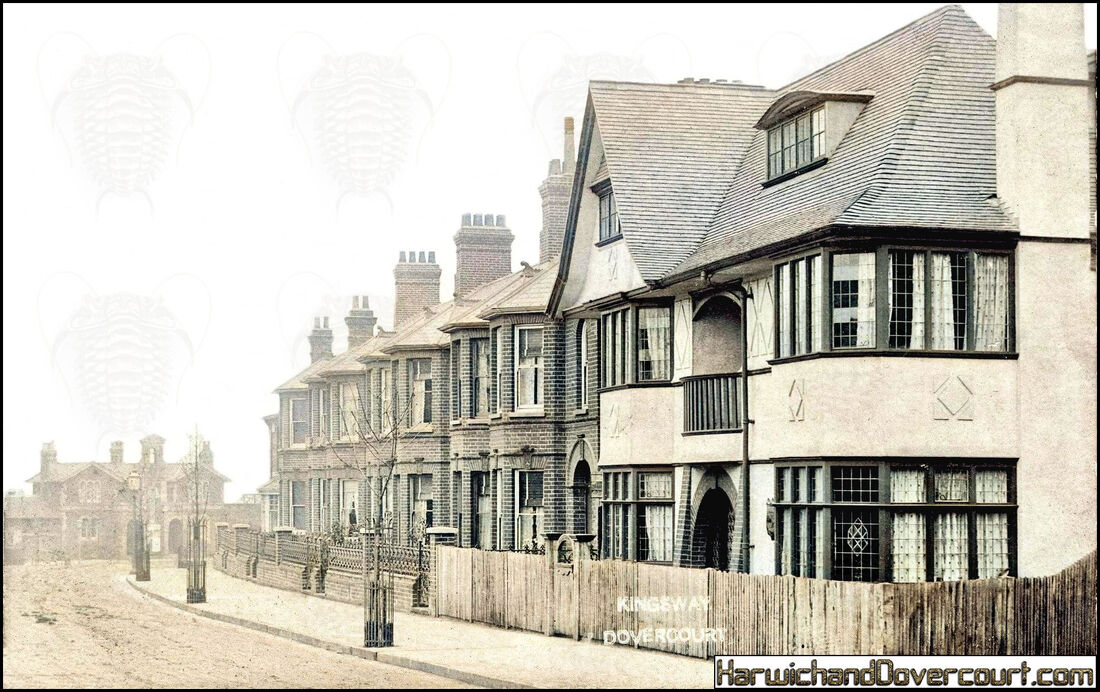 139669 Kingsway,Dovercourt (1934) Bell's Series
​
An early view of the newly opened Harwich Head Post Office, Kingsway, Dovercourt. The Post Office officially opened on the 17th July 1934.
The publisher of the postcard was "Bell’s", one of the best local photographers in the area.
Postcode for the nearest location is CO12 3AB click here for Google Earth imagery. 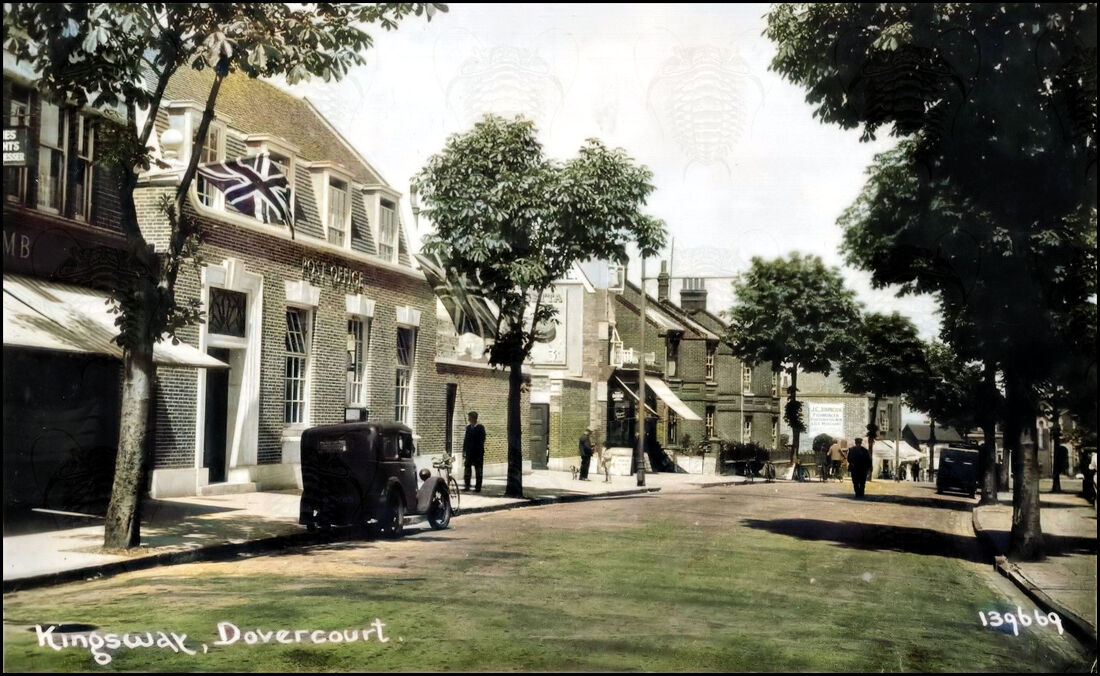 #29533 The Railway Station, Dovercourt (1908) Bell's Photography.
"Dovercourt Bay" Railway station on the Harwich line, was opened by the Eastern Union Railway on Tuesday the 15th August 1854. It was originally named Dovercourt, but the name was changed to Dovercourt Bay on 1 May 1913 and finally reverted again to Dovercourt on 14 December 1972. The Station situated at the junction of Lower Kingsway and Station road, has changed very little over the years and is fortunately still operational, with a steady flow of commuters (including London for a  princely sum of £5,596 per year). The fountain to the front, was built around the same time as this photo was taken and gave refreshment to man and animal alike.
#76616 The Railway Station, Dovercourt (1913) Bell's Photography.
​ 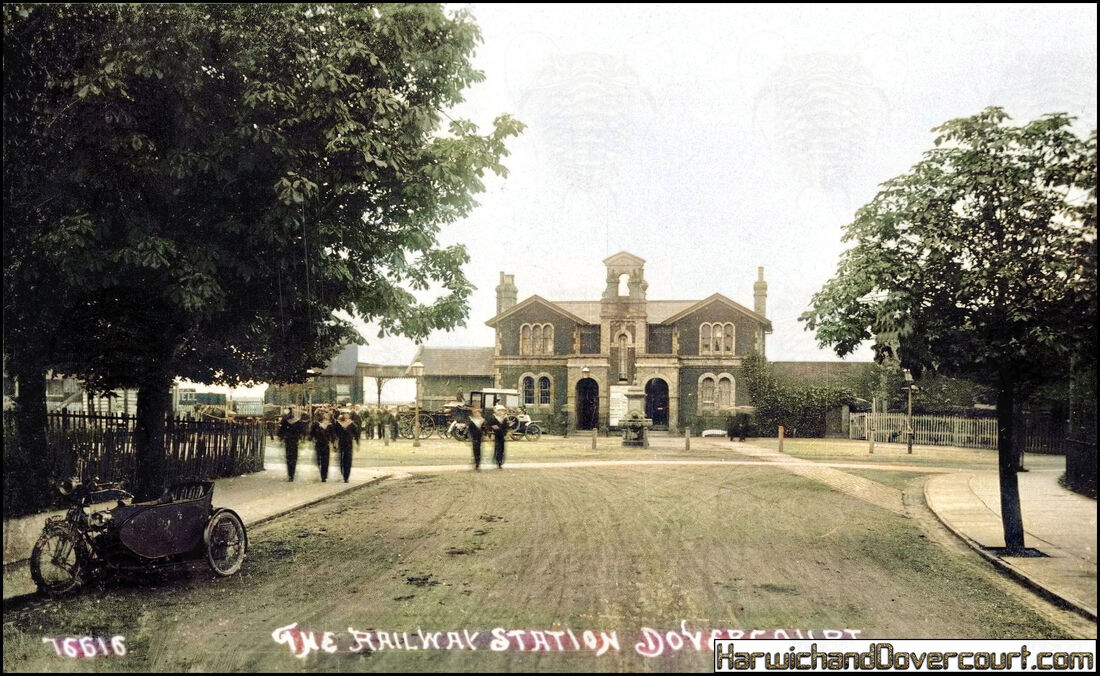